Having recently discovered the work of Yannis Ritsos, through his Diaries of Exile I’ve been reading a couple of anthologies of work by twentieth century poets from Greece. This is thanks to the Poetry Library on the South Bank in London. 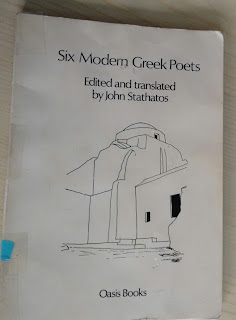 I began with Six Modern Greek Poets, edited and translated by John Stathatos and published in the UK by Oasis books. The names of the poets were familiar; George Seferis, Takis Sinopoulos, Yannis Ritsos and some less familiar Aris Alexandrou and as I was pleased to see one female poet, Eleni Vakalo. Ritsos remained one of my favourites with his short poems that contain the whole of a life, like ‘Return of  Deserter

He’d felt uneasy these last days, as though he were a sentry who’d deserted
leaving the town unguarded.

I was moved by the poetry of Takis Sinopoulos. These are war poems and Sinopoulos was a doctor who served during the occupation of Greece in the 1940s and the civil war which followed. The impact of the horrors in evident in poems like The Beheading and Deathfeast through which the dead move like ghosts. He discusses his work in an interview in 1980, the year before he died.

… Gradually as they had come, they disappeared,
took to the valley, scattering in the wind.
For the last time I watched them, called to them.
The fire sank to the ground and from the windows came –
How just a single star can make the night navigable.
How in the empty church is the unknown dead anointed
his body laid to rest among the flowers.