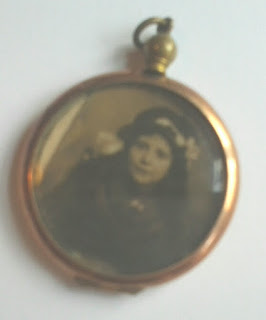 I have written previously about my great uncle, Robert Victor Davies but not about his older sister,  Mary Eleanor who was known to the family as Lallie.

During the summer I was going through a box of miscellaneous family photographs with my brother when we came across a locket. On one side it had a dark haired girl and on the other a young man in uniform. 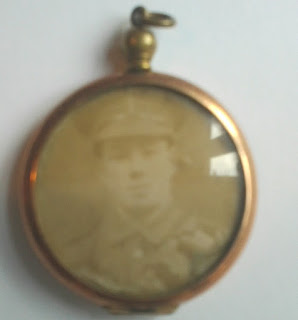 My brother didn’t know who they were but I recognised the girl as the oldest child born to Mary Grace Davies (nee Pritchard) and Robert Samuel Davies. Further investigations into the box revealed a full sized photograph of the soldier. This was the photograph I’d been looking for ever since visting Ypres and the Menin Gate and finding Victor’s details amongst the missing. Just so as there could be no doubt about his identity on the back of the photograph in my Dad’s neat handwriting was the inscription
“Robert Victor Davies – killed in France [sic] during the 1914-18 war at age 20 years. Served in Ireland for a time where this photo was taken.”

Victor was killed on the Pilchem Ridge, near Ypres in Belgium on 31st July 1917 with many others from the 15th Battalion of the Royal Welsh Fusiliers.

I went back to look at the locket with Lallie on one side and Victor on the other and remembered a conversation with an older relative when I was a child. Lallie had died young she had said. A quick check of records on the internet showed that she had died at the age of 20 in March 1916. That was when I realised with the sense of having been given something that the locket I was holding must have belonged to their mother, Mary Grace and that she had the locket made so that she could carry her two lost children close to her heart. 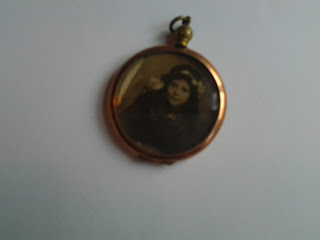 2 Replies on “Lallie and Victor – a mother’s locket”