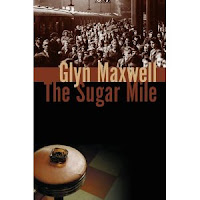 I came across references to The Sugar Mile in a book about the first day of the Blitz, written by Peter Stansky, an American historian. This was on the shelf in the village library and even though I have plenty still to read about Malta I borrowed it in the interests of widening my reading. Of course the local library like many across the country needs borrowers and supporters.

Glyn Maxwell is a British poet who lives in the States. The Sugar Mile is his eight collection. It takes place over the weekend of 8th and 9th September 2011 and Saturday 7th September 1940. The sugar mile refers to the Tate and Lyle factory in London which was bombed during the blitz. This is poetry in voices, Maxwell is also a playwright and it shows… there’s Raul the bar tender in who is looking forward to his new job

That there ain’t nobody else in New York City

paid so high? Windows on the World.

Then there’s Joey, an old man at the bar who by chance survived in 1940 when bombs fell on the school in which they were sheltering, waiting for the buses which never arrived.

I was the paper boy

moving between fires that suddenly.

There are other voices from 1940; the Pray family, a man called Dennis Medland who probably is someone else and even the lost bus driver who doesn’t know if he’s supposed to be in Camden Town or Canning Town.

It’s utterly compelling and I read it straight through like a play unfolding. In the days before having children I’d probably have read it in one sitting, caught up in the drama.

Of course I was also reading it with a writer’s eye, noticing things like Raul the bar tender speaking in sestinas. I’m still deciding upon the structure for the later part of the Malta sequence. At the moment it’s all separate poems and points of view. Maxwell mostly sticks to one voice per poem but I’m minded to start mixing the voices, particularly for Operation Pedestal but it does need to be clear who is speaking. Maxwell also, wisely, limits his cast of characters and they are all fictitious as far as I’m aware. There will be more voices in my poems and many of them from men were really there. There is a fine line to be drawn between paying tribute to those who fought to save Malta and trespassing on their stories. Rather daunting.