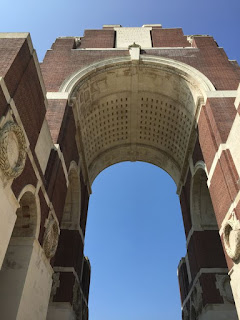 On the walls of the First World War Memorial on Thiepval ridge are the names of 72,194 men, most of whom were killed during the Battle of the Somme (1st July -18th November 1916).  They have no known grave, either because their remains were never found (they were obliterated by shell-fire) or because by the time what was left of them was recovered it was no longer possible to identify the man. The Thiepval Memorial is a gigantic red brick structure, designed by Lutyens and unveiled by the Prince of Wales on 1stAugust 1932.
As first time visitor to the Somme Battlefields you leave the visitor centre and walk towards the memorial along a wide grass avenue, the width of a couple of football pitches with trees on either side.  As you approach the memorial you feel smaller and smaller and more insignificant as it dominates the landscape.
I first visited in 2012 and have returned to the Somme on a yearly basis since. I have always felt ambivalent about this memorial. There are others with similarly lengthy lists of names of the missing like the Menin Gate in Ypres/Ieper. Somehow that memorial with the daily sounding of the last post seems to provide a pause and a chance to remember the missing men as human beings. To me the Thiepval Memorial always seemed to be about Empire and grandeur. Perhaps you are meant to be impressed by its size and scale? It makes me feel uneasy. Is this how they would want to be remembered, by this monolithic structure with its vast arches?
Perhaps it was never intended to offer consolation about the lost men. There is an online article by Prof Mark Connelly of the University of Kent about The loneliness ofThiepval.
While visiting the memorial in the autumn of 2014 with fellow writer Vanessa Gebbie we discovered Paul Emmanuel’s counter memorial ‘The Lost Men, France’. By October there was very little left of his banners which had been hung earlier in the year within view of the memorial but set apart from it in the fields. Like the men who were killed during the battle and whose remains have become part of the land, the silk from the banners had been ripped and dispersed by the wind and rain. There was a damp drizzle on the afternoon we visited and it felt poignant and appropriate to find what were in effect pieces of skin scattered on the ploughed ground.
It felt grateful to the artist as it seemed to me as if his work came far closer to expressing what I feel when I go to the Somme, about the fragility of the men who were killed. Later in 2014 Paul Emmanuel returned to the Somme to gather up the remnants of the artwork.