I’d decided I wasn’t going to try to emulate Sarah Salway who will be doing weekly artist’s dates during 2016 but her most recent blog post had planted a seed in my subconscious about having more fun in 2016. During January the irrepressible Amy Souza has organised another art/poetry postcard exchange as happened last January so I have vaguely been collecting arty crafty bits and pieces. Then there was the blog post from Leo Babauta at Zen Habits about getting out of his comfort zone by spending a weekend learning self defence and making art is definitely something I’m not at ease with.

So unexpectedly on Saturday night I found myself sitting down for my first artist’s date in a long time with the aim of creating some ‘art’ postcards. This involved cutting, glue, more cutting, some sewing, lots of recycling (or do I mean upcycling?), anyway much re-using of catalogues and old shirt buttons.

And voila bythe end of the evening I had made four collage postcards, with a fifth of a button heart just wanting to be finished. The one which was the most fun was the paper weaving card in pinks and purples which turned out to be much nicer than I expected, using the covers of two plant catalogues – thank you Sarah Raven and Unwins. I cut the strips by hand as hunting for a ruler would have slowed things down and the key to the success of the evening was keeping going. The irregular appearance of  the strips added to the effect, I feel. 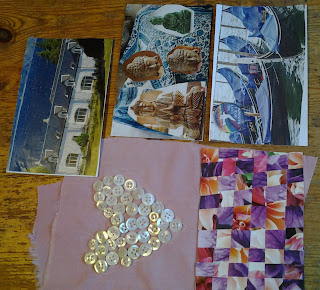