I spent yesterday in Northampton in the company of fellow writers and readers for the tenth Birthday celebrations for Cinnamon Press which was founded by the industrious and inspiring Jan Fortune in 2005. In her usual generous spirit the weekend’s events were shared with other independent presses Fair Acre Press, Grey Hen Press and local organisations, Creative Writers @the Museum and Northampton University Creative Writing Department.

So it was a day fulled to the brim with abundance, highlights for me included the opening workshop on writing success led by Hazel Manuel – do follow her on twitter for writing tips and ideas, the  reading by Charles Bennett who was the first Director of the Ledbury poetry festival and now teaches creative writing at the University of Northampton. I particularly loved his poems about Dragon Orchard in Herefordshire. If he brings the same level of energy and enthusiasm to his teaching then Northampton is clearly a good place to study creative writing. Then Susan Richardson entranced the audience with her poems based on Inuit myth and legend. And if you haven’t come across Liz Lefroy’s Mending the Ordinary then you are missing out on some remarkable work.

I was able to share the poems in Convoy and later in the day met someone whose father had been on one of the Royal Navy ships protecting the convoys. I will write another blog post about how to find out more about the convoys.

It was a chance to catch up with fellow Cinnamon authors and to hear new work from authors I hadn’t previously met. Frances Spurrier spent the day organising pop-up readings in the cafe and led the way iwth her own poems from The Pilgrim’s Way.

And there was cake of many sorts in the cafe and wonderful home-made Asparagus soup with sourdough bread for folk like me who prefer savoury treats. 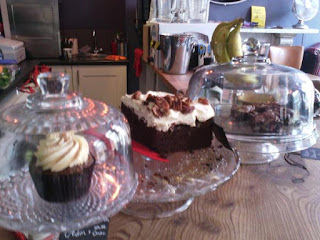