Any readers of my blog who know me in real life will be aware that there’s been little time for poetry in the last couple of months. But I’m making my way back into the flow and lovely things have begun to happen again, like the Magma celebration reading at Keats House. This was for all those poets who had won prizes or been short-listed in the competition, which was judged by Philip Gross. Much thanks to Tania Hershman who persuaded me to go with her. She introduced me to Jo Bell, who is doing marvellous things to inspire people to write poems on her 52 blog. 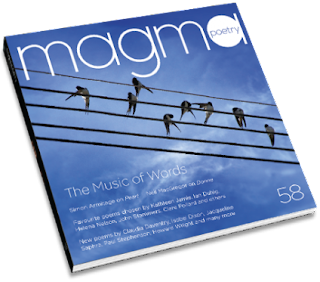 I came away from the evening with poems ringing and reverberating around my head and a copy of Magma 58 clutched in my paws. In fact every hair on my head wanted to stand up and hum and sing. The winning poem, Snow Country by Dominic Bury is breathtakingly good so do buy a copy of the magazine or even better subscribe to it. The London launch of issue 58 takes place on Friday 7th March at the London Review of Books bookshop.

At the same time there was the Sensing Spaces exhibition at the Royal Academy which Vanessa Gebbie enthused about so much I just had to go to see it. Letting architects loose in the academy turns out to have been a very good idea. They’ve all created extra-ordinary spaces and it’s the only ‘art’ exhibition I’ve been to where the other people going round wanted to share their impressions. Like the man who wanted to make sure I’d realised there were thirty five steps to the top of the stairs where the angels were. I did write a poem about the space in which I felt the least comfortable, never mind that everyone else thought they were in a library and that the hazel sticks resembled rolled scrolls or the spines of books. I was surprised but pleased to have the poem accepted for the Ekphrasis wandering words reading. This is also on Friday 7th March for anyone who isn’t already going to the Magma launch.

And like London buses there is yet another poetry event happening in the capital on Friday with a gathering of the five UK and Ireland current poet laureates, who are all female. At a time, when it feels to me like women are being demeaned in public life, it is absolutely marvellous that this is being celebrated. Wow  indeed. No wonder it is sold out.