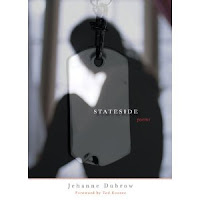 This was one of my finds of 2011. I can’t quite remember how I came across the book, not in a bookshop that’s for sure. It was undoubtedly somewhere on one of my rambles round the internet. I often castigate myself for spending time browsing, hopping from link to link, then realising how much valuable writing time I’ve lost. In this instance it as well worth it.

Stateside is by an American poet, Jehanne Dubrow and is her third collection. Her husband is in the US Navy and these poems deal with her experience of those of other wives who are left on shore when the men go to sea. The second part of the book is thirteen poems of Penelope waiting for Odysseus including the poem Instructions to Other Penelopes

spin what you can from his absence a shroud
a crotched throw in indigo and red.

The third and final part of the book takes a long hard look at what happens when they do come back and how difficult that can be too.

These are poems to read over and over again, to savour. I would hope they have been and will be picked up by people who would not normally read poetry. They certainly deserve a wider audience as well as those of us who don’t let a day go by without some poetry.

I came to them when I had just fully embarked on my Malta poems and was writing about the father (my Taid) away at sea during the war and the little girl (my mother) waiting at home in North Wales. I would go back to Stateside for inspiration when I was fretting about whether to go on, whether it was worth it.

It means the moveable stays tied.
Lockers hold shut. The waves don’t slide
a metal box across the decks,
or scatter screws like jacks, the sea
like a rebellious child that wrecks
all tools which aren’t fastened tightly
or fixed.