One of the lovely things that has happened since Convoy was published is that people keep bringing me stories about their own family history, often from the second world war but not always. There was the friend, whose grandmother had walked with Gandhi. But mostly they are stories from the war; and recently they have all been about men being given white feathers by women who should have known better. A practice which began in the first world war of giving a white feather to any man who was not in uniform, including men who were home on leave. 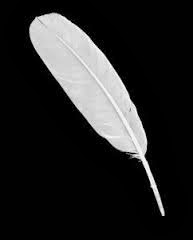